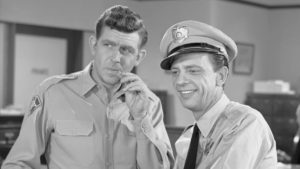 One day Barney Fife was practicing his quick draw.
He accidentally shot Thelma Lou, he broke the law.
Andy had no choice but to put Barney in jail.
But Andy let Barney out when he said he had a crop of marijuana to sell.
Barney offered Andy a fifty-fifty deal.
But Andy wanted it all, he decided to steal.
He shot poor Barney and dumped his body in Myers Lake.
Andy became furious when he learned the marijuana was fake.
The crop of marijuana turned out to be oregano.
Andy was arrested and jail was where he had to go.
Andy will be pounding rocks for the rest of his days.
The Sheriff soon learned that crime doesn’t pay.

As he follows in his daddy’s footsteps, Sadly his daddy is dead. Trice Stone is the runner-up for president, Running u...

Each time The cast iron bell rings a Drops of sunlight Fill a Thirsty heart again...

This poem is written for and dedicated to the father of my very good friend, Mayko Vang. (...

I don’t think sinners in hell can feel the pain I feel now I don’t think love exists for me I constantly ask myse...

I wonder if you'd ever like a guy like me. A guy who's as confidently shy like me. Who doesn't wish to say much, but whe...

In valley still, the woe i keep And slumber fell, such peace i seek What silence held to fear with ease Such somber keys...

Rather than leave you and get on with my life Where I could find someone better for me, I die a million slow deaths...

The feeling of all people. Businesses fear, Families fear, Friends fear, Everyone fears. Of loss of what they desir...

"When I Lay Down"

A tapestry of clouds Gathered like blue-gray smoke That bellowed from a cigar Made in Havana A sea of mountains Rise up...