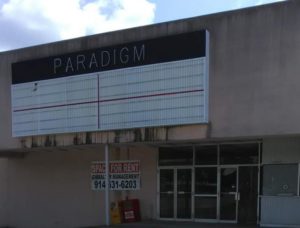 Years ago, a movie theater called ‘Paradigm’ was open in Morristown, Tennessee. Before that, it was the ‘Capri’ movie theater. I watched my first two movies at Capri 40 years ago in 1979. Those two movies were ‘The Apple Dumpling Gang Rides Again’ and ‘The Black Hole’.

At first, Capri only had one theater. They built an extra theater in the late seventies or early eighties and renamed it the ‘Capri Twin’ movie theater. During the Summer of 1983, they built an additional two theaters and renamed it ‘Capri Four’. I remember that it was during the Summer of 1983 because they were building the two extra theaters when my family and I went to watch ‘Superman III’.

The only competition that Capri had at the time was the ‘Volunteer Twin’ movie theater. Because Capri had two more theaters than Volunteer, Volunteer was no threat to Capri Four. Volunteer Twin eventually went out of business.

A movie theater was opened at the College Square Mall when the mall opened in 1988. At first, it had six theaters. A few years later, they added three extra theaters which made it have nine theaters. The theaters at the mall were a threat to Capri Four.

Capri Four had to eventually become a discount theater to be able to compete with the theaters at the mall. Capri started charging only $1.50 per movie ticket. I watched ‘Batman & Robin’ there when it was a discount theater. Sadly, even lowering the price of movie tickets couldn’t save Capri Four. They soon shut their doors.

A couple to a few years later, a new theater opened where Capri Four was located. The new name of the theaters was Paradigm. Like Capri, Paradigm had four theaters and for a while, it was also a discount theater. But then they made a bad decision. Paradigm decided to charge full price for movie tickets.

I knew they were in trouble when I read that they were no longer a discount theater. The theaters at the mall were too much competition. They offered over twice as many movies to watch. They also had bigger screens and better sound than Paradigm had.

While Capri/Paradigm have been closed for many years, it was still a great place to watch movies at, and I have fond memories of going there.

"“The Anime Animators are Underpaid and Bad Working Conditions”"

According from “The History of Anime” by Lisa Marie Cooper that anime has been existed for several d...

"A Humane Word From Satan"

Written by Mark Twain TO THE EDITOR OF HARPER'S WEEKLY: Dear Sir and Kinsman,--Let us have done with this frivolous ta...

"The Cartesian Circle and God"

"Turn of the Screw: A Menacing Fixation"

A Menacing Fixation The governess of The Turn of the Screw travels to the Bly estate with the intention of loo...

My birthday just recently passed in July, and now that I'm 23 years old, I have learned m...

"My Complaint About Nintendo"

It has come to my attention that Nintendo sends free products to certain people who review them on Youtube. I think this...

(Trends Within Culture and how they shape the Art World)...