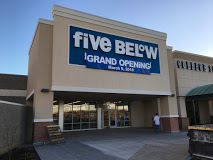 The thing that made these stores special was that everything was $5.00 or less. That’s why the stores are called ‘Five Below’. But now that they’re charging $10.00 for certain items, the stores have lost the special quality they once had. It may not be possible for them to sell certain items for only $5.00. But if that is the case, they should not sell those items in their stores.

The name of their stores is now misleading. Everything is no longer $5.00 or less. It’s $10.00 or less. They should rename their stores ‘Ten Below’. Maybe I’m the only person who is upset by this, but I doubt it. I’m not trying to be a cheapskate when I complain. But it’s like I said earlier, selling products for $5.00 or less is what made their stores special. But now that is gone.

Even though I’m angry about the situation, I hope that people don’t stop shopping at their stores. I would hate to see them go out of business.

Capitalism can be used in a shared, creative way to solve global warming. “Creative capitalism is a response to the lo...

"You don't understand me. You guys think it's cool to make a person feel even more down. I don't want to see you guys ta...

"You’re Never Too Sexy for a Condom"

Have you ever thought to yourself, “Man, I wish there was a way for me to have sex without worrying about getting preg...

I want to share a story with you that I learned yesterday. It's about a woman's stupid behavior. A man had to leave a re...

"Work Hard, Play Hard: How to Deal With the Fallout of Your Work Relationship"

It’s your first day of work, and you’re a little nervous that you won’t fit in . You have short conversations wi...

Shakespeare's question "To be or not to be" presents an issue to the play since, for various reasons, it could be consid...

"Down Thunder Road with an American Girl"

I’ve felt for a long time that rock n’ roll, maybe more than any other form of music, is about encouragement. It’s...