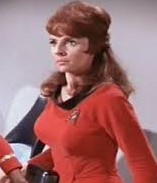 She starred in a Star Trek episode as the girlfriend of Khan.
She was talented but it’s sad because now she is gone.
She had Multiple Sclerosis and by 1985, she was bound to a wheelchair.
When she died in December of 2003, it proved that life can be very unfair.

She guest starred in such shows as Hawaii Five-O, Bonanza and Daniel Boone.
When she died at the age of sixty-eight, she died too soon.
Because of her illness, she was unable to reprise her role in Star Trek II.
She was a beautiful and sexy actress and her name was Madlyn Rhue.

"This Night is Different"

This night is different I could explain...

along the road I saw my shadow laying there dead it was my demise I told you I heard voices in my head repeating yo...

"Sonnet 29: When, in disgrace with fortune and men’s eyes"

When, in disgrace with fortune and men’s eyes, I all alone beweep my outcast state, And trouble deaf heaven with my bo...

A red barn, with white trim. Horses and cows inside. Dirt roads, pastures, another barn for chickens. Fields and orchard...

Life is chaos, interruption. Work, home, kids, duties, too much complexity, it eats at my wellbeing. One environment, t...

"Only If I Knew You Better"

My bad girl Only if I knew you better Maybe we’d have it all But you just talk about cheddar It’s like you like gold...

"ugliness in a beautiful body"

your heart, a victorious red silhouette impelling of poison from left to right....

Love is never one piece, it's always many pieces often as a puzzle many pieces the table with hands delicate ..thought,...

It is hard to describe the fire in one's eyes In more ways than one, fire can be a disguise Hiding the fear and the co...