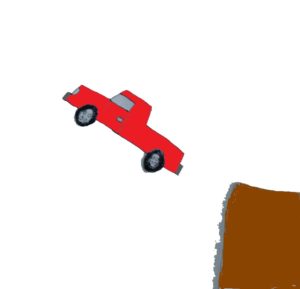 A jerk thought he was being smart when he stole my Ford truck.
But he didn’t know that it had no brakes and he was out of luck.
I removed the worn out ones but I hadn’t gotten around to putting on new brakes.
The thief soon realized  that stealing  my truck was a bad idea and a huge mistake.

When I saw that my truck was gone, I called the cops.
When that thief was driving my truck, he couldn’t stop.
He was in big trouble because he drove off a cliff.
One minute he was alive and the next, he was a stiff.

His family blamed me for not replacing the brakes and they decided to sue.
When the judge ruled in their favor, I did something that was stupid to do.
The judge ordered me to pay them $500,000 and I punched him in the gut.
He hit me so hard with his gavel that a doctor had to wire my jaw shut.

Punching him was a mistake and he put me in jail for the crime.
It was a very bad place to be, I was raped thirty-seven times.
When I think about the incident, it still makes me shiver and shake.
The moral of the story is, don’t let your truck be stolen unless it has brakes.

Birds sing their songs, insects too, plants all around. Lush life, humidity, the trees. I watch my steps, careful. Dange...

By: Rainer Maria Rilke Among all the others there sat a guest Who sipped her tea as if one apart, And she held her cup...

Look at what you have created A child of sorrow and despair If you'd just waited I would still be there....

I feel dead on the inside pretending to be happy when my life is a lie wanting to grab a knife there’s days were I...

"Back When I Had Her"

This day another lonely lady stayed. I know a woman could remember ever! So soon her little eyes became afraid, Being fe...

Pathos conceals the ethos of life, the Yang & Yin that make us us. To subdue, to vanquish, to suppress the deceit...

"Is your Heart and Soul happy?"

I tried on Society I tried it on for size and Ill fitting you were Speaking kindly You’re all just actors acting...

"I Wrote The Declaration of Independence"

You have A bible but you don't read it. You have food and you make sure you eat it. God showed you his way but you act l...

Love is purest if done rightly, But still why holding it back from those who love deeply, You brag about love, Yet yo...