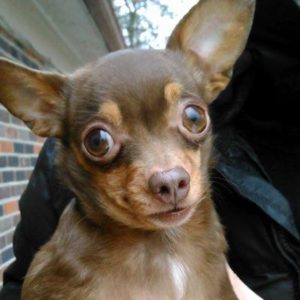 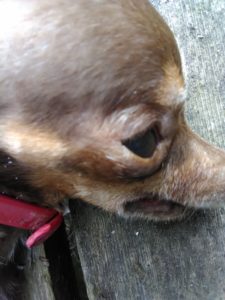 I would’ve celebrated my seventh anniversary with my dog today if she hadn’t died in July. For those who may not know, my dog’s nae was Agnes. She was a Chihuahua. When she died, it didn’t just break my heart. It broke my spirit as well. With the exception of me spending ten days in the hospital in 2014, Agnes was with me every single day for nearly seven years.

After Agnes died, I constantly felt agitated and it was even hard for me to sit still. I couldn’t even get any pleasure from my video games. But I did feel a little comfort by watching some of “The Dukes of Hazzard” episodes.

For a few days after my cat died in 2018, I found some comfort by sitting in a chair close to her grave. But it’s not like that with Agnes. I liked my cat but I liked Agnes much better. Being around Agnes’s grave for more than a minute or two makes me feel sad and it tears me up. Sadly, her grave is a reminder that I lost the best dog that I’ve ever had.

I wasn’t going to get another dog but thirty-eight days after Agnes’s death, I bought another Chihuahua. Her name is Hazel. She’s two years old and i paid $200 for her. I figured that getting a new dog might ease the pain I’ve been going through. While owning my new dog is bringing me some happiness, she can’t replace Agnes. Hazel looks similar to Agnes. Not identical but similar.

If you own a dog, I hope that your dog lives to be twenty years old. I don’t want others to have to experience the pain I’ve been going through. But sadly, many people have or will go through the same ordeal of losing their dogs. Agnes was my all time favorite dog and I wouldn’t have taken $1,000,000 for her.

In school, subjects such as history, science, and math can become self-absorbing in a forthright manner. That practice c...

"An Imbalance of Identity"

Stability is often dependent upon a clear and accurate self-concept.  When an individual’s identity is obscured or fa...

The Final Frontier On Netflix, I’ve been watching the first Star Trek series from 1966-69. I hadn’t viewed...

"10 Tips to Keep Your Pets Safe During the Holidays"

With all the holiday decorations going up, we must remember to make our homes safe for our furry friends. There may be...

"“The Anime Animators are Underpaid and Bad Working Conditions”"

According from “The History of Anime” by Lisa Marie Cooper that anime has been existed for several d...

"The Happy Mask is Heavy"

Last night was a struggle. Due to some bad side effects the doctors took me off my mood s...