"The Death of Chad Sheets" 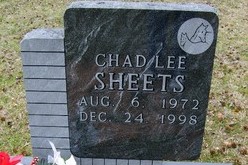 When I learned about his death, it was hard to believe.
An actor died twenty years ago today on Christmas Eve.
Sadly, he died at the young age of twenty-six.
He starred in The Supernaturals, A Smoky Mountain Christmas and other flicks.

He starred in The Dukes of Hazzard and Magnum P.I. as well.
He tried to beat Colon Cancer but sadly, he was destined to fail.
When a person dies on Christmas Eve, it’s a shame.
He was a talented actor and Chad Sheets was his name.

I would walk a thousand miles if that meant you would stay away from me. I would...

"We Live Next Door"

at night we sit upon the cold floor the children poor we live next door we learn to read and write from the refrigerator...

I guess ten empty bottles on the lawn this morning is nine too many to call it just having fun so you laid plans an...

"I Love You More"

I love you more, When you smile that smile Or laugh that goofy laugh… I stop and think that maybe You might be my...

It’s fantastic to grasp  Indeed, it is a known fact...

i feel angry but I don't do angry i have depression but it could be laziness does that make me a bad person? i w...

A Sister's Love A sister's love, always harsh and a little s...

Afraid to love again You tell me your different that your love will be a lasting love uns...

"At the End of Days"

Looking at the world beyond, I see a horrid sight. Of people dying, earth is crying, lands are plauged with blight. An...