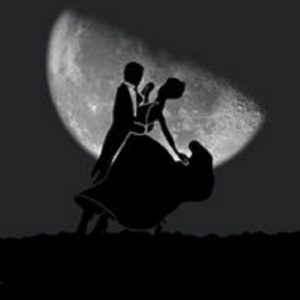 It was singles-night at the Aragon Ballroom so, two of my buddies and I decided to go and meet some chicks, a term which seemed inappropriate now that we were nearing thirty. We could hear a waltz being played as we entered the foyer. I stepped ahead of the others and climbed the grand staircase to the ballroom.

I hadn’t been there since high school but it was the same. A Spanish courtyard with projected clouds moving slowly on the ceiling. I walked to the edge of the ballroom floor and watched the couples moving beautifully to the sound of the music.

I saw her almost immediately and could not take my eyes from her. She not only was beautiful but was having more fun dancing than anyone else or so it appeared. I knew at once I wanted to dance with her but was hesitant because of my poor dancing ability – I had the proverbial two left feet.

When the music came to an end, some couples moved off of the floor while others remained until the next piece of music began. Some changed partners which was not unusual seeing it was singles-night. The beautiful girl’s partner left her and she stood alone very poised and quiet. When no one approached her I felt compelled to go to her.

I stepped in front of her and smiled, “May I have the next dance, please.”

She looked in my direction and smiled, “Yes, of course.”

“I’m not a very good dancer. I have two left feet. I hope you don’t mind.”

The music began. It was a foxtrot which I knew pretty well. She put her right hand up and reached for my shoulder with her left. I moved forward and met her embrace. “I’m June. Who are you?”

I chuckled in embarrassment. “I’m Herb Grant and I’m happy to make your acquaintance.”

We moved away with the music. She followed beautifully. I felt like I really knew how to dance with her near me. It was then that I noticed something odd. She was looking at me and smiling but for some reason, I got the impression she wasn’t seeing me. The music came to an end, she did not release my hand. “I think I’ll sit the next one out. Would you assist me off of the dance floor, please?”

I was surprised at the request, “Yes, of course.”

“Look for a red cap over the back of a lounge seat. That’s where I wish to go.”

I looked around and saw it almost immediately. “Yes, I see it,” and walked in that direction. It was then that I realized this woman could not see. She was blind. I took her hand and put it on my arm, drawing her closer.

As we approached her table, I held her hand again. “Here we are.” I placed her hand on her table.

“Thank you, Herb. You’ve been very kind.” She had her bearing now and found her seat with no trouble.

“Is there anything I can get for you?”

“No, thank you. If you see the waiter, would you ask him to come to me?”

“Yes, of course. There he is. Thank you, June, for a beautiful dance. You camouflaged my poor dancing ability beautifully.”

She laughed, “You’re welcome, Herb. You have a pleasant evening.”

“Thank you.” I found myself reluctant to leave her. I was ashamed when I thought it was probably out of pity which I doubt she would have appreciated – she seemed so self-possessed. I signaled the waiter, then joined the two friends I had come with.

I watched her the rest of the evening and was amazed at how popular she was. She seemed to know every dance step required. Men sometimes broke in while she was partnering with someone else. She was very gracious and made a flawless transition. I got the feeling that she knew everyone she danced with.

As the evening came to a close, an elderly woman approached her, spoke a few words and they both got up and left the ballroom.

I stopped the waiter and asked him about June.

“Oh, yes. That’s June Pfingsten. She’s been a regular here at singles-night for as long as I can remember.”

“Oh, yes, quite blind, from birth, I understand.

“And the elderly woman who approached her?

“That was her mother, Thelma. She brings her in and collects her at the end of the evening. Very nice people.”

“Yes, so I gather.” I wanted to ask more questions but contained my curiosity. Perhaps I would come back when they had singles night again. I would certainly like to dance with her again and maybe find out more about her on a personal level. I wonder if she would remember me. I’d mention my two left feet. That should jog her memory.

Author’s note: In memory of June Pfingsten who was an older neighbor and my companion as I grew up. She was not blind but paralyzed from the waist down from birth. She passed at 27 years of age. I often think of her and hope wherever she is now, she’s dancing her heart out.

By: Charles Dickens Next morning, after breakfast, I entered on school life again. I went, accompanied by Mr. Wickfield...

Note:: Well, turns out as I transferred chapter five from Docs onto here, I accidentally deleted it. I'm having to copy...

By: Charles Dickens I laboured hard at my book, without allowing it to interfere with the punctual discharge of my news...

'Look, mom. I'm fighting in this war. Our country has fought in and helped many wars and many countries. We have even he...

"WHEN DESTINY TEARS THEM APART"

John, intimate boyfriend of Nancy, is all set to take leave of her to return to his home town abroad. On completion of t...

Their was this tiny hole in the wall That had this littl...

By: Charles Dickens Chapter 11 PODSNAPPERY Mr Podsnap was well to do, and stood very high in...

By: Charles Dickens   Chapter 17 A SOCIAL CHORUS Amazement sits enthroned upon the countenances...

By: Charles Dickens Chapter I : Treats of the place where Oliver Twist was born, and of the circumstances attending his...