"We BISEXUALS love you BOTH!" 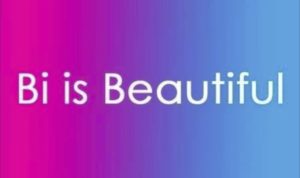 What does bisexual mean to you?

Some claim it to mean rejected by both.

Let us scrutinize this theory:

We, BISEXUALS, are very friendly and interesting people. We are very respectful of others’ sexuality and the natural attractions to each other.

Is there any reason you can’t accept ours?

I came across two profiles on another site that were discriminatory against us BISEXUALS. I am always perplexed because we BISEXUALS love you all.

One profile that I saw was actually from a BISEXUAL woman!

Yes, we love both of you!

Most people only love half of the population of the world.
Gays love one half & straights love the other half.

We love the entire population!

Samantha Allen asks, are bisexual people shut out of the LGBT club?

We, BISEXUALS, face twice the discrimination as our gay peers, she tells us, as she references two studies from the Journal of Bisexuality.

This really makes me feel like we don’t belong in any society. I would love to get a better understanding of the way some individuals think of us. We are so loving of all of you, yet some of you seem to hate us in return. Allen proves my point, “the discrimination we face within the LGBT community is as real as discrimination we face outside of it”.
I just don’t understand why you can’t accept us for who we are.

Aren’t we all supposed to be loving and accepting of each other for our differences?

“BISEXUALS experience monosexism, the privileging of sexual attraction to one sex or gender, from heterosexual, gay, and lesbian communities,” the study concluded.

Because of all this monosexism,
“bisexual men are 6.3 times more likely to consider death by suicide than straight men.”

Am I making too much out of this?

Well, allow me to inform you about my experience.

When I went to get “sex tips for straight women from a gay man,” in Paris,

the gay man asked who in the audience was gay.

Then he asked about the straights.

Guess who he didn’t even consider.

This is the phenomenon known as bi-erasure. So again he found us to be invisible. 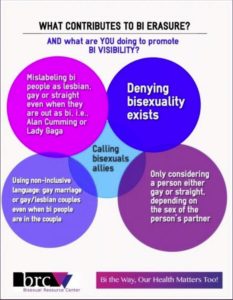 I would like to know what some of you may think so I can better understand how you think we are so abnormal.

If I were to say that I dislike or don’t accept a particular group, say if I called transgender people, freaks, would I be correct or accepting?

Not on your life!

Everyone would look at me as a racist or bigot. But if there are those who hate us, we are just supposed to be impervious to the hatred from both communities.

One narrow-minded, ignorant homosexual actually told me I had to choose!

Can you believe that?

I can’t love both, but I have to choose just one?

Okay, if I must choose, my choice is BOTH!
I thought our sexuality was not a choice though, it’s just who we are naturally attracted to.

Are you actually going to tell me you chose your sexuality in your life?

Our sexuality is NOT a choice, it’s just who we are!

How would you feel if I told you that you must love BOTH?

Bi is BOTH
Bi is BEAUTIFUL
AND
Bi is BEST!

Can you choose to love tomatoes 1 day then hate them the next?

Of course not, so you must see my point, right?

To add salt to the wound, I am in the worst-case scenario, a BISEXUAL man.

Case in point, we “BISEXUAL men have been portrayed—even within the LGBT community—as secretly gay, sexually confused vectors of disease.” Allen suggests in her other article “why bisexual men are still fighting to convince us they exist.”

Is there any reason to believe that is not everyone’s belief by now?

It stands to reason why only a mere “2% of men identified themselves as BISEXUAL on a survey in 2016 from the CDC,” Allen also explains. This equates to 3 million bi guys in the USA.

We need to be aggressive in our efforts to dispel these unwarranted beliefs. Unfortunately, people barely see us, bi guys, as human, when they persevere in their falsehoods.

We, “BISEXUAL men, have our very own existence questioned more often”, Allen states. I have heard that some of you even think we are in the closet or want to remain “half normal”.

Why do people view bisexuality among women as much more socially acceptable?

One theory is that we guys find it more appealing to get more than one gal in bed. But for us guys, there is always a double standard.

Do you see us bi guys as weak, or perhaps unmanly?

Before you answer, maybe you should ask the women first.
In a book written by Dr. Chiarolli, titled Women in Relationships with Bisexual Men: Bi Men by Women, she interviews 78 women who stated that women see us, bi guys, “as better husbands, fathers, and lovers.”

After you finish with that article, then you may want to get Jessica Pan’s declaration in her article,
What It’s Really Like for Women to Date Bisexual Men when she asserts that,

So on the off chance that you define a man’s manliness based on the women he gets, then we bi guys are more manly than the “macho” men out there since we will do whatever it takes to please her.

Also, we are much more open to pleasing our gals by our willingness to do much more in bed for her. So the next time you may feel that we bi guys are more feminine somehow,  just remember that we don’t worry about what society views us as!

We do what we enjoy!
Hands down!

NO questions asked!
while we also put our partner’s needs first.

Because of the stigma, we BISEXUALS have some of the worst mental illnesses and negative effects in the LGBT community, including suicide, per Allen.

Lois Shearing also shows this in her article, Are you doing your bit for 20biteen? when she states,

“Mental health is another area where bisexual people fare worse than our gay and straight peers. In late 2018, UK LGBT advocacy charity Stonewall released a new study showing that 28% of bi women and 18% of bi men had deliberated self-harm in the last year, compared to 14% of lesbians and 8% of gay men.”

That is very disturbing.

Also, always remember that you are never the only one that is BISEXUAL.
There are many more of us. 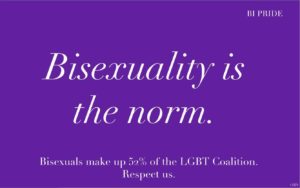 Freud even stated that we are ALL innately BISEXUAL. We, then, branch out to the other two orientations.

Keep in mind that there is sexual energy among both of us, guys and gals. Each of us has a great aura about ourselves. Each gender is beautiful, for both the male and female anatomy has its own inherent beauty.

I, myself, love each gender for different reasons.

Why do some of you feel that we are so abnormal for loving both?

And how can we be a part of your life if you don’t even give us that chance in the first place?

It’s because you think we can’t be monogamous. Such preconceived notions make it nearly impossible for us to even find a partner which creates yet another reason we face such impossible odds in our lives.

Madeleine Holden, in her article, The women who go wild for bisexual guys, proves my point that most of you believe we are greedy or can’t stay loyal,

“Both are more likely to experience anxiety, depression and suicidal thoughts than straight and gay people, a phenomenon attributed to the “double discrimination” that comes with being not quite welcome in either the straight or gay communities. Similarly, straight, lesbian and gay individuals are generally less willing to be in a relationship with bi people, leading to a kind of paradox: Bisexuality is viewed as a hedonistic, choice-fuelled, all-you-can-eat sexuality, but bisexual people are left feeling like they’re not really wanted by anyone.”

These types of judgmental people just make no sense to me. We love you BOTH, yet BOTH reject us. So the theory “rejected by BOTH” may very well be true.

What are we BISEXUALS to do, to convince you that we are worth loving?

One last thing I want to add is what my best friend has to say about how she feels about our BISEXUAL dilemma.

“It’s not as though I would never fool around with a bisexual man. I’m just saying that if I were to actually feel it necessary to go online to look for a partner, I wouldn’t want to be with a bisexual man. Because I’m straight, I feel that it would just be leading myself into trouble. It wouldn’t be fair to ask a person that is attracted to men as well as women, to not be able to be with men as well. I believe in a monogamous marriage, so I feel that I would prefer to be with someone that could at least be with just one side or the other. Not as if I’m saying that a straight guy wouldn’t want to stray to other women, but I feel it is fairer that a bisexual is able to be in a relationship with another that likes the same thing. Openness might be a bit easier.”

So there you have it, I thank her for her honesty while she proves the “rejected by both” scenario.

I, however, feel that if we are ever to have a meaningful relationship with anyone, that being dishonest about who we truly are, might be the only option.

Therein lies the dilemma.
The very dilemma which pushes people away from us.

Be truthful and possibly never have a relationship because they may reject us?

Lie about who we really are and thus not have an honest or meaningful relationship with anyone.

It is really a dam shame that our sexuality ostracizes us for our particular preferences since we can not help our natural attraction toward others.

The ultimate declaration that I want to convey is that I am very proud to be bi, but I am not pan-sexual and that I am not attracted to every single person in the world. I am attracted to cisgender men and women only.

I, in no way, agree with Robyn Ochs, in her opinion, that there are more than two genders (or sexes). If you care to dispute me, then reveal a 3rd or 4th set of genitalia to me.

So I ask you all, monosexuals, please enlighten me to your way of thinking,

fellow bisexuals, please tell me if you agree with our particular dilemma in which we are unfortunately in because we love “both”.

Why distract you from the simplicity of my words with a stage? I may have just crawled up from under you but I don'...

Dear universe, I ve noticed a heavy weight on my shoulders, that doesn't belong to me. It wa...

Religion should have thanked me for my childhood. No matter how much I tried, they conviced me, I would never be en...

pulled left, tangled right. Conclusion is frustrating, failed an objective. Blame it on me. Blame it all on me. se...

Before I left, I filled her with songs, with movies, with restaurants and diners, with arguments, with problems, with ag...

"Erin at the liquor store"

"Playing for a Cause, Musicians to End Racism and Promote Unity and Love"

By Nellie Bly CHAPTER XI. IN THE BATH. A FEW more songs and we were told to go wi...